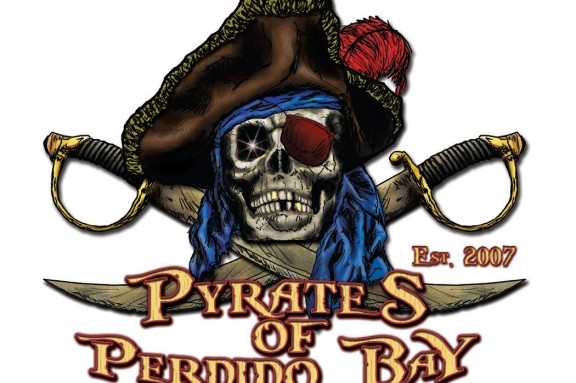 Launched in 2006 by founding Captain Thom Lowery with 15 original members.Currently there are 24 members. Members are mostly located in the Perdido Key, Innerarity Island and far western parts of the county.

To have fun by socializing and particpating in Mardi Gras parades along the Northwest Florida and Lower Alabama Gulf Coast.

Our float is a Pyrate Ship named “The Pearl of Perdido” which was built out of wood by our members. Improvements have been made each year. We meet once a month on the first Tuesday at Legends (Perdido Bay Golf). We have Krewe beads to hand out and each December we elect a King and Queen at our regualr meeting and the names are announced at our annual Christmas party. We try to have a social outing each month.

Membership is open to those who like to have fun in a casual atmosphere and love Mardi Gras parades. Potential new members can join each year starting after Mardi Gras until October. Must be at least 21 years old. Contact a member if you are interested.

Since we do not have many members, we try to attend another krewe’s mardi gras ball as a group. We always attend the All-Krewe Ball in June.