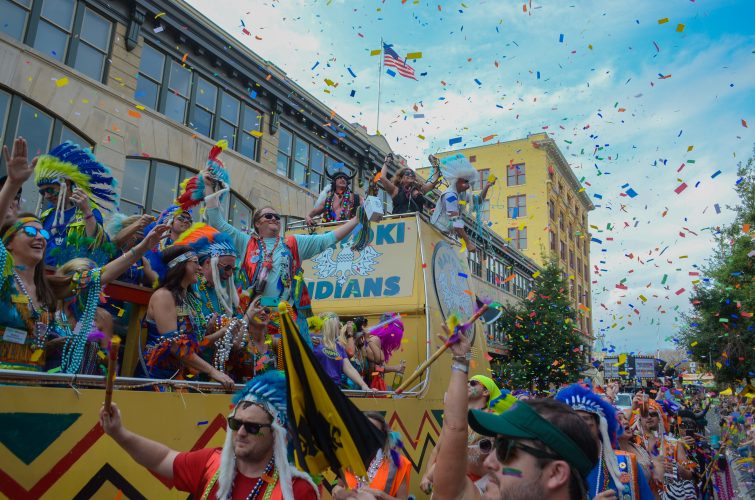 Founded in 1961, The Mayokis are a fictitious tribe that was formed in 1961 to enhance the City of Pensacola’s annual Fiesta of Five Flags celebration. During the Fiesta season, the Mayoki Court takes part in a light-hearted parody of what might have happened when Spanish Conquistador Don Tristan Deluna first landed on the shores of Pensacola Beach in 1559. For the rest of the week the Mayokis travel to local businesses, childcare centers and nursing homes throughout the Pensacola and Gulf Breeze areas to provide entertainment and spread Fiesta cheer.

The Krewe is for couples only! The very exclusive Mayokis bring fun every where they travel and you know they are coming by the bells on their ankles.   The Mayokis are known for their festive and joyus party attitude, but they get much less exposure for their works of charity in the community. The Mayokis frequently visit assissted-living facilities, children’s hospitals and other charitable locations.

The Chief, a member who is elected by popular vote, and his wife the queen dove, are dressed in pure white robes with matching headdresses. The runner-up is dubbed Medicine Man and his wife becomes Witch Woman and both are very visible during the parade accompanying the Chief and his court.

The Tribe of Mayoki was organized to perpetuate the spirit of friendship & hospitality extended by Indians to Don Tristan DeLuna and his colonists in 1559 when the landed on the white sands of the Pensacola area. The Mayoki Court also participates in many Fiesta events such as parades, VIP appearances and dances. The Tribe of Mayoki is a renowned Fiesta tradition of fun-loving friendship and frivolity.

We have approximately 250 active members.  We accept 14 new couples each year which are put up by the previous court members.