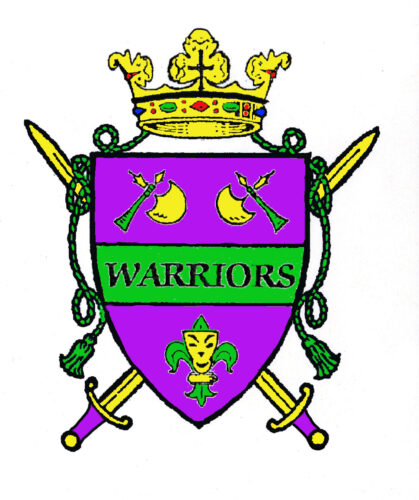 The Krewe of Warriors is proud to be celebrating our 35th year as a Pensacola Mardi Gras Krewe! Warriors is a unique Krewe made up of a co-ed group, changing our theme each year. Today KOW has a membership cap of 120 members and we are the only Krewe in Pensacola that welcomes our member’s children/family to be a part of our Kids Court. The Warriors host an annual Mardi Gras Ball, with a premier band, selling out the event each year. We parade with three floats, with our Court float being donned with our current theme decor, which is designated for our current Court, Board of Governors, Directors, and other designees. We also have our Krewe float that is decorated in the traditional Mardi Gras colors, ridden by our general membership, and lastly our Kids Court float is filled with Warrior kiddos, who like the adults dress up along with our theme and partake in the Saturday Pensacola Mardi Gras Parade. Warriors have been recognized as one of the oldest Krewes, established in 1986 and we are going strong with keeping the Mardi Gras festivities and traditions going throughout the streets of Pensacola.

Every year the Warriors select a different theme, decorate a float, and make costumes accordingly.  This year they have chosen to renew their original theme of “Road Warriors” to celebrate their 30 year anniversary.

In addition to the Krewe Court, the Warriors also have a Kidz Court, so members’ children and grandchildren can participate.  The Kidz Court dresses up in costume based on our theme each year.  They also have their own float and during the Grand Mardi Gras parade they get to parade with us and throw beads.  They have a blast!

As much as the Warriors enjoy a good party, we also love to get involved in many different local charities.  We support: Favor House, the American Red Cross, Blaze Sports Pensacola, the Northwest Florida Zoo, Belmont Arts Center.

The Warriors have about 100 members. They hold membership meetings and get together several times throughout the year for fun events. Some members have been in the Krewe for 20 years or more. To become a member, candidates must be sponsored by a current member. Membership applications are available at the Kings Party every year, usually held in July. Keep tuned to their website for updates on this event!