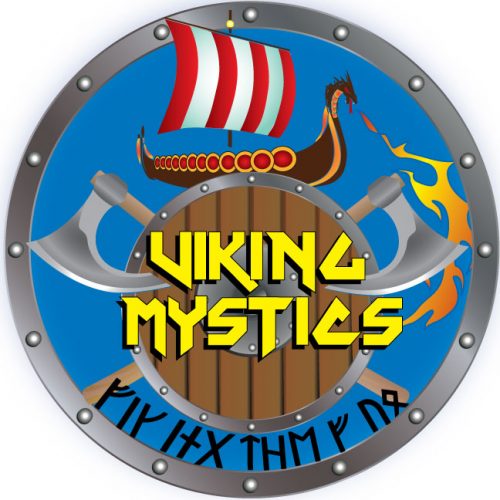 The Viking Mystics began their voyage in the merry month of March.  Each Viking chooses, and is called by, their own Viking name.  Rustics dress in the character design they have selected.   Each Viking is known for their generosity and ability to plunder through the streets in search of opportunities to raise danegeld (gold) for local charitable organizations.

The Viking Mystics launched their maiden voyage in the spring of 2016.  It is a non-profit organization dedicated to colony involvement through gathering donations and lending a hand to fellow villagers.

Most Vikings pillage the parade route on foot, while their Viking ship provides up to 20 spots for the less fortunate raiders plus the Gods~ Odin and his wife Frig.  Our current ‘float’ing vessel will light the way for our Viking ‘longship’ to sail into port next year.  The vessel is adorned with customized, collectible, battle shields that can be sponsored by local businesses.     A great portion of the sponsorship goes directly to the charity of choice.  Norse Myth has it that to receive and display a treasure from the Viking Mystics is to gain your place among the brave in the Halls of Valhalla.

New Vikings are determined through sponsored warriors.  Each Viking is dedicated to take an active, yearlong journey, within the group.  Seaworthy members must be willing to take on leadership while raiding parade routes during the year.  Members enjoy raising their horns in toast along with feasting on the bones of battle and trolls.