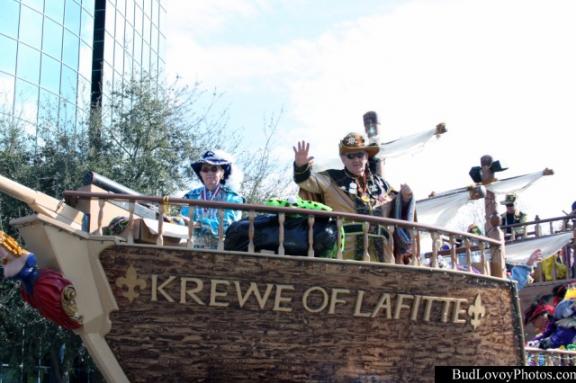 Started in 1954 by five local business men, the Krewe quickly grew to it current size of 275 male members. Originally, the Krewe was a local only organization, but word spread quickly about our ability to attract large crowds and the travels began. Now the Krewe travels annually to Ft Walton Beach, Panama City Beach, Tallahassee, Bradenton, Gulfport, Biloxi, and even occasionally to Jacksonville.

“The Krewe of Lafitte, based in Pensacola, FL, is the largest all male Mardi Gras Krewe in the Florida Panhandle. The organization was founded in 1954 to promote and celebrate Carnival. The 275 Krewe members enjoy a strong bond between themselves, as well as their families. Krewe of Lafitte fills the Christmas, Mardi Gras & Fiesta parade routes with up to 13 lighted floats all built & maintained by the members & housed in 2 warehouses owned by the Krewe. Three of the 13 floats are used for traveling to out of town parades, ranging from Gulfport, Mississippi to Bradenton, Florida. The Krewe also participates in all of the local parades. Their activities do not stop with parade – they also “float around” to local schools, assisted living facilities, and retirement homes spreading cheer and happiness.

The Krewe has been hosting the lighted Fiesta and Mardi Gras parade since 1954 at no cost to the community. The themed seven seas lighted floats are manned by majestically dressed masked men throwing beads, and trinkets from above to open hands of parade goers along the downtown parade route. Krewe of Lafitte has achieved what they set out to accomplish, by bringing citizens of the community together in a celebration atmosphere for Christmas, Mardi Gras, & Fiesta!”

Our Lafitte and his Queen are elected annually during May. The current Lafitte 61 is Mr. Warren Culbertson and his Queen is Mrs. Lee Wood.

The Krewe of Lafitte hosts three Balls each year. Winter ball, where we formally welcome each new member and his Lady; Mardi Gras Ball held annually on the Friday night prior to Fat Tuesday and immediately following our Light Night Parade in the Pensacola Bay Center; And our Coronation Ball where the next Jean Lafitte and his Queen are unmasked along with their Court of five Knights and their Ladies.

Membership is by invitation only, so ask a member and come visit us for an evening of fun at our barns.

Open to the Public

Membership is by invitation only, so ask a member and come visit us for an evening of fun at our barns.