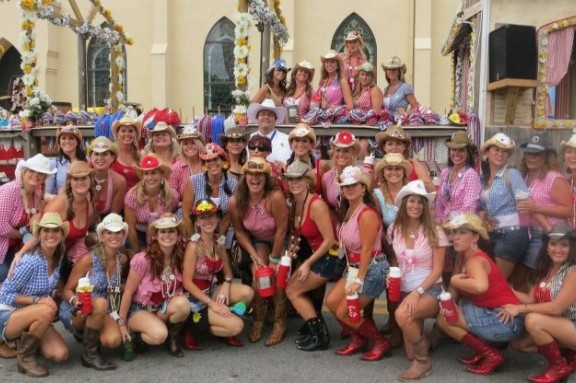 Formed in 2005, with just a few members, the Krewe grew quickly to become one of the most known Krewes out there! With line dancing in the streets, their cowgirl hats and boots, the Daisy Dukes makes their presence known.

The Krewe of Daisy Dukes was formed in 2005 by a group of like minded women wanting to promote unity and friendship through various krewe activities, functions and community services.
The krewe consists of a diverse group of dedicated and ambitious women from our community as well as one selected man known as the “Boss Hogg”.

The Krewe of Daisy Dukes participates in four parades each year: the Mardi Gras parades in both Pensacola and Pensacola Beach, the Fiesta of Five Flags Parade to celebrate the founding of Pensacola in 1559 and the Pensacola Christmas Parade.

Although one of the main objectives of the Krewe of Daisy Dukes is to have fun, the Krewe also enjoys assisting charities and organizations in the Pensacola, FL area.

The Daisy Dukes have approximately 100 members.  Current Members may nominate a new member during the renewal period in September each year.