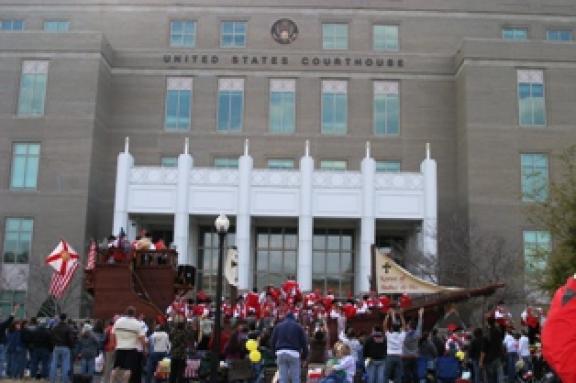 Established in 2001 Admiral Andres de Pez began plans for the expedition that would lead to the first successful European colonization of Pensacola.The results of this expedition and both de Pez and Siguenza’s strong recommendations led eventually to the founding of the Presidio Santa Maria de Galve in 1698 along the shores of Pensacola Bay. Andres de Pez had developed the plan, lobbied the highest officials of Spain for support, and had commanded the expedition that sealed the fate of Pensacola.

The Krewe is a all male Krewe and is a sight to behold dawning their tabards and displaying the regal ship.  The over 100 member Krewe consists mostly of professionals who range in age from mid-20s to mid-40s and are very active in the community.

Their Ball is closed to the public.

Membership is closed right now and runs from September through October. Membership is done by nominations within the Krewe.