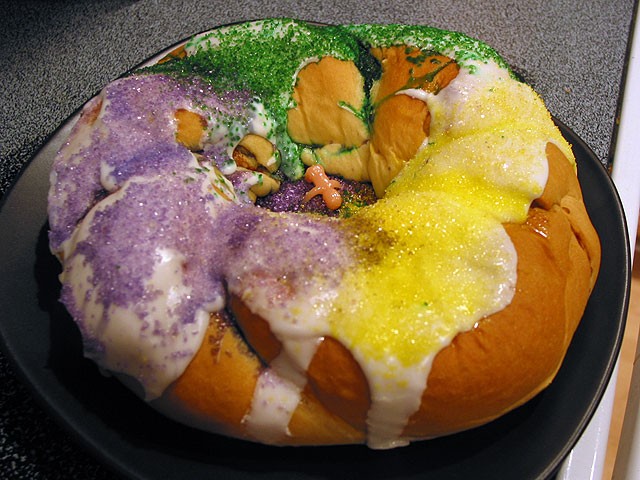 MoonPies may have eventually joined the Mardi Gras party, and yes, they’re easier to throw from a float, but King Cake’s association with Carnival season goes all the way back to the 1870s in the U.S., and its origins in Europe go back even further.

King Cake is a sweet brioche, glazed and topped with green, gold and purple colored sugar or frosting. These colors of the Mardi Gras season signify justice, faith and power.

Traditionally, somewhere in the cake, a tiny plastic baby (representing Jesus) is hidden, and its significance for the finder has different meanings, depending on who you ask. Some say the baby brings luck and prosperity to the finder; others say the finder becomes the king or queen of the evening; and still others say the finder is responsible for purchasing the next King Cake or throwing the next Mardi Gras party.

In some parts of the world, the King Cake is more closely associated with the Christmas season, and is commonly eaten from Christmas Eve to Epiphany Eve, or Dec. 14 through Jan. 5, the “12 Days of Christmas” of the popular holiday song.

But in the Southeast, we enjoy this treat for the pre-Lenten season, which starts with the Epiphany Eve, also known as 12th Night, and continues through to Fat Tuesday.

In this region, the King Cake tradition is thought to have made its way to New Orleans from France in 1870. The traditional oval shape is meant to represent unity among the different faiths.

These days, King Cake comes variety of flavors and fillings from the traditional cinnamon to cream cheese, pecan, strawberry and cherry-cream cheese mixtures.

And why is it called a King Cake? The name comes from the “Three Kings,” or the Magi, who are said to have visited the Christ child in Bethlehem at the Epiphany.

During the Pensacola Mardi Gras Kick-Off Celebration, Bluejay’s Bakery provides the community with a King Cake, covering a six-foot table. This is cut and shared with the community, free of charge, as a way of officially welcoming Mardi Gras back to Pensacola.

That doesn’t mean we stop eating King Cake at the beginning of January, though. It’s commonly served at balls, parties and cerebrations throughout the community all the way up until Fat Tuesday, which falls this year on Feb. 13.